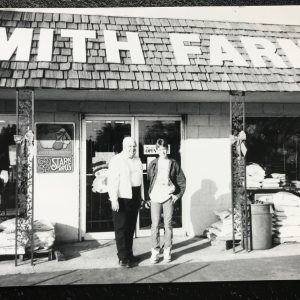 Sixty years ago, Bill and Joyce Smith started the business at NW 10 and Quapaw when they moved to Oklahoma City from Tulsa.  A few years later, they expanded by adding the old Cuppie’s Auto Repair building just east of the first building which is still the main nucleus of the store today.

A second generation of Smiths, Ken and Mike, began working in the family business from the time they were in junior high.

Ken Smith is the Chief Financial Officer and his son, Geoff, is the Manager and President in Oklahoma City.

Beyond their generational heritage, they are proud of all their team, especially long-time, loyal staff members:  Cathy Grider, Wes Symes, Janet Wilson, and Tracy Littlehead, who have been with Smiths from 21 to 40 years.

Photo: Grandpa “Bill” Smith & grandson, Geoff in front of the original store in the mid-80s.