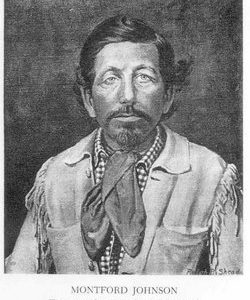 An entrepreneur and cattle rancher, Montford T. Johnson, born in November 1843, built a ranching empire in central Oklahoma and played a positive role in the growth of the Chickasaw Nation.

Johnson was a contemporary and a friend of Jesse Chisholm, the legendary scout and trader, who convinced him to establish cattle ranches on the unruly western edge of the Chickasaw Nation. Over the next twenty-five years Johnson expanded his operations, including a ranch outside of the Chickasaw Nation at Council Grove whose location, according to Dr. Bob Blackburn of the Oklahoma History Society, was at the corner of NW 10th and North MacArthur.

Montford’s cattle ranching business spanned a huge part of central Oklahoma, including modern-day Oklahoma City and was widely known as an honest man who made business decisions that were beneficial to all involved. He was also known for his charitable actions. Montford regularly gave food to starving Native Americans who had been neglected by the U.S. Government.  Orphaned as a child, he also took in many orphaned children, giving them a loving home in which they could grow.

The Johnson businesses continued to thrive until the 1980s when they were dissolved into individual holdings.

*Information from the Oklahoma Historical Society and The Chickasaw Rancher