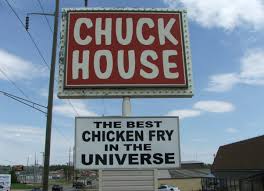 Chuck House may not have been the first restaurant from the Thurber family, but it is the one with the most longevity.  Beginning with the first location in Edmond across the street from what is now the University of Central Oklahoma, they moved to Northwest 10th Street on December 20, 1978.  In 2009, they opened a second location in Midwest City, and it is still going strong.

Some employees have gone on to be bank presidents, nurses, college professors, sheriffs, geologists, and even work for the FBI. Over 34 Thurber family members have worked in the family business with the 4th generation working there now. Generations are represented not only in the employees but also in their customers as kids who grew up coming Chuck House are now bringing in their children.

Posted in General
← Liberia, Iraq, Kenya, and WesTen?Drive in Movies in WesTen? →