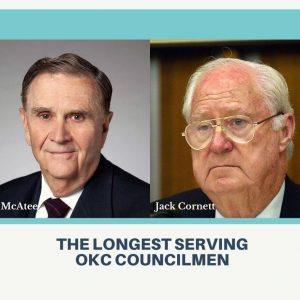 Did you know that OKC Ward 3 has been the home of the two longest consecutively serving OKC Council Members?  Jack Cornett’s day job was running the family meat packing plant, but he made it his business to work for the people after he was elected in 1977. Staying in office until 2001 to become a County Commissioner, he became the longest serving councilman in history.  He died in 2015.

Larry McAtee, a local businessman, followed him as the Ward 3 Councilman and with his 2021 departure, will be the councilman with the second longest service for the city.

Ward 3 has been fortunate to have had strong representation on the Oklahoma City Council with these two men.  They are Bright Spots for The WesTen District.