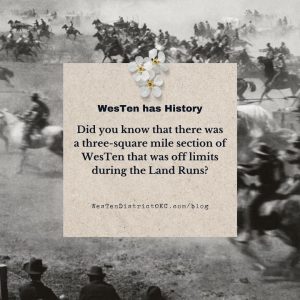 Council Grove in WesTen is an approximately three-square mile area (between NW 8th & NW 36th/Lake Overholser and Ann Arbor) that was a grove of cottonwood, elm and oaks.  Initially the land was inhabited by the Creek Nation but many of the Plains Indians gathered there due to the good water and plentiful timber, and it became a neutral convening location for the tribes to meet.

Since it was property owned by the federal government, it was not open to settlement during the land runs in Oklahoma. Eventually it became, what we believe, was the first federal timber reserve and was used to build Fort Reno.

Posted in General
← Interested in Creating a Bright Spot?WesTen has History →